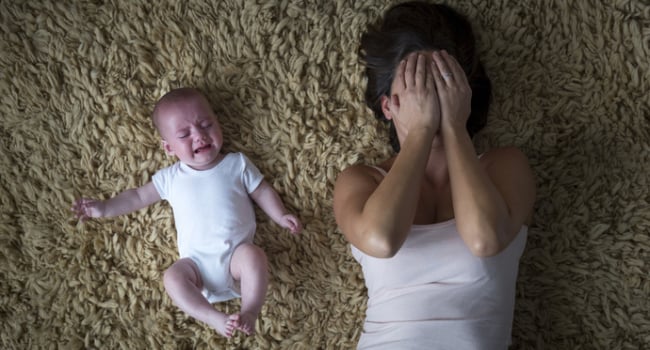 Postpartum depression (whose symptoms are not much different from those of normal depression) is dangerous not only for young mothers, but also for newborns. A study by staff at the London School of Hygiene and Tropical Medicine, together with staff at the Sangat Center, found that 44% of children with depressed mothers performed poorly on a developmental scale.

Whereas children with healthy mothers had such problems in no more than 20% of the total number of children. The reason for the developmental delay was because the postpartum depressed mothers were unable to breastfeed and used infant formula.

Why does postpartum depression occur?

Why does postpartum depression occur and can it be avoided? The first description of the signs of postpartum (also called in medicine «postnatal» depression) can be found in the writings of Hippocrates.

But the first serious scientific substantiation of this form of depressive disorder that develops immediately after delivery, appeared only in the XX century. According to statistics, on average, 13% of mothers around the world suffer from depression in the postpartum period, which manifests itself as a sharp decline in mood throughout the day, loss of interest in life and any pleasure, gloomy vision of the future, impaired sleep and appetite, lack of attachment to the child. Undiagnosed and, consequently, untreated depression can lead to such a serious mental illness as bipolar psychosis (up to and including suicide attempts).

The least chance of becoming a victim of postpartum depression is among «old mothers» (i.e., women who give birth after 30). Spanish scientists from the Polytechnic University of Valencia found that the risk of developing postpartum depression decreases with age. They developed a methodology to predict postpartum depression in 80% of cases by evaluating such risk factors as heredity, the presence of psychiatric problems in the subjects’ families, the level of social support for young mothers, etc.

The study, conducted by American scientists from the Medical University of Norfolk (Virginia) proved that men can suffer from postpartum depression on an equal basis with women. Experts analyzed 43 studies which involved 28 thousand people from 1980 to 2009. They studied the behavior of fathers after their children were three months to a year.

As it turned out, almost 10% of fathers experience postpartum depression. By comparison, about only 5 percent of men suffer from depression within a year. According to study authors Drs. James Paulson and Charneille Bazemore, This means that depression in men who are expecting a child or have become fathers is a serious social problem.

How to treat postpartum depression

American pediatricians have found a simple way to get rid of postpartum depression. According to them, to prevent postpartum depression it is enough for 3 hours every day to touch the baby’s skin with your hands or cheeks, to make sensory contact and stroking. This reduces the risk of depression by 80%, because at this time the hormone oxytocin is produced in a woman’s blood, which makes her feel better and gives confidence. Such touching also has a beneficial effect on the newborn.

«Touching «skin to skin» many times reduces the nervousness of the baby, babies cry less and sleep better, allowing the mother to rest and improve her mood,» the scientists are sure. In addition, it is useful not only to iron the baby, but also to carry him 2 hours a day in a «kangaroo backpack.» Such therapy proved to be the most effective among other techniques to prevent postpartum depression, the pediatricians specified.

Another effective remedy for postpartum depression, according to the same tireless American researchers, is regular intake during pregnancy of polyunsaturated fatty acids Omega-3, which are abundant in fish oil and nuts. In the experiment, scientists suggested that 26 pregnant women took fish oil capsules, while the other 26 participants took placebo capsules with corn oil.

The women began taking the capsules from the 24th week of pregnancy and continued after delivery. After childbirth scientists carried out questioning which purpose was to find out — whether the ladies experience symptoms of postpartum depression. It turned out that ladies who took corn oil capsules exhibited more pronounced signs of apathy and despondency.

Women who took fish oil were more often in a good mood and were full of optimism. Scientists suggest that this effect of polyunsaturated fatty acids is related to their effect on the nervous system. Omega-3 fatty acids nourish brain cells, promoting better transmission of nerve impulses, and thus prevent irritability and loss of energy.