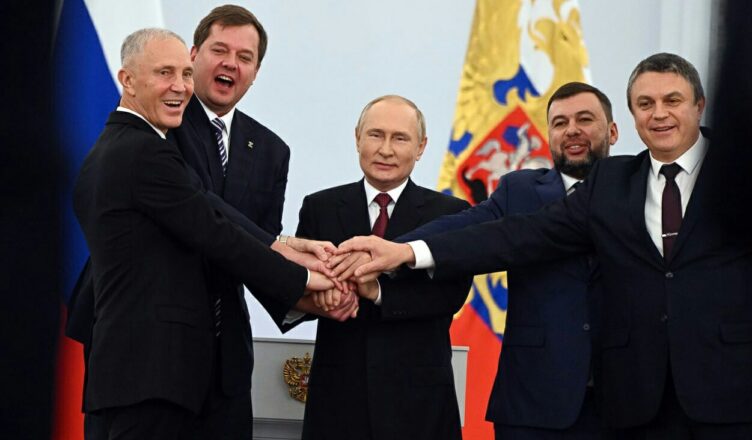 This week, one Russian newspaper, Moskovsky Komsomolets, concluded: “Vladimir Putin has nowhere to retreat. So, he’ll continue to attack.”

Cue St George’s Hall of the Kremlin Palace and the controversial signing ceremony in front of MPs, senators and officials.

Vladimir Putin’s decision to annex the four Ukrainian territories (“incorporate” in Kremlinspeak) is the Russian president’s latest offensive in his battle with Ukraine and the West.

Through annexation, the Kremlin is trying to change the facts on the ground (at a time when Russia has been losing ground in Ukraine).

Mr Putin wants to present a fait accompli to Kyiv and to the West.

It raises the stakes considerably in the president’s standoff with Ukraine and the Western world.

The Kremlin event was carefully choreographed for maximum patriotic effect: plenty of applause for the president from the invited audience; a stirring rendition of the national anthem; and Mr Putin and the four Kremlin-appointed administrators of the annexed territories clasping hands and chanting “Russia! Russia!” along with everyone in the hall.

But declaring “this is my land now” doesn’t make it true. Especially in the light of the so-called “referendums” in the occupied territories, which were not real referendums at all.

They were Kremlin-conceived, Kremlin-controlled events designed as a smokescreen for Moscow to grab 15% of Ukraine’s territory. Ukraine will not accept this annexation; neither will the international community as a whole. 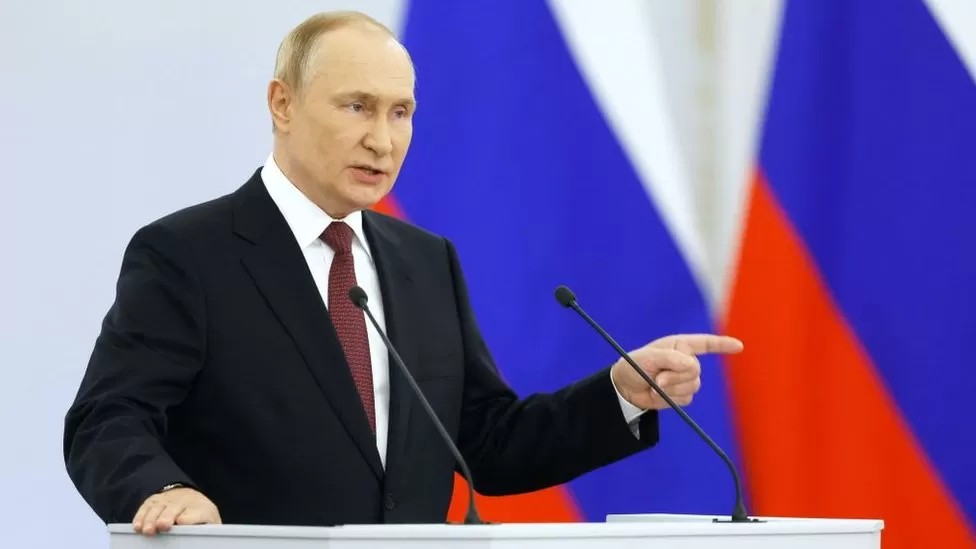 “The United States will never, never, never recognise Russia’s claim on Ukraine sovereign territory,” US President Joe Biden said on Thursday, while UN Secretary General António Guterres had already said the annexation “would have no legal value and deserves to be condemned”.

But that still leaves the question: what now? How will Mr Putin respond when Ukrainian troops push on to try to reclaim their land?

Russia has already warned that any attack on its “new territories” will be viewed as an attack on the territorial integrity of Russia. The Kremlin says it reserves the right to respond “with all means available to it”.

In his speech today, Vladimir Putin said the United States had created a “precedent” by using nuclear weapons against Japan at the end of World War Two.

That comment won’t have gone unnoticed by Western governments.

Russia’s nuclear sabre-rattling has been causing concern in the West. But it’s worrying people inside Russia, too. This week, an editorial in the country’s mainstream Nezavisimaya Gazeta newspaper was heavily critical of “senior Russian officials” for making “nuclear threats”.

“It is incredible that today… high-ranking officials in Russia start talking about the nuclear button,” the editorial continued. “They do this without a second thought… They even forget to make the qualification so important for the world to hear: ‘Of course, we mustn’t allow this under any circumstance.’

“To allow, in thoughts and words, the possibility of a nuclear conflict is a sure step to allowing it in reality.”

What struck me most about President Putin’s annexation speech was just how full it was of anti-Western bile. The Russian president seems set on whipping up nationalistic, anti-Western sentiment in the country.

It’s a useful diversion from the problems at home and the battlefields of Ukraine.