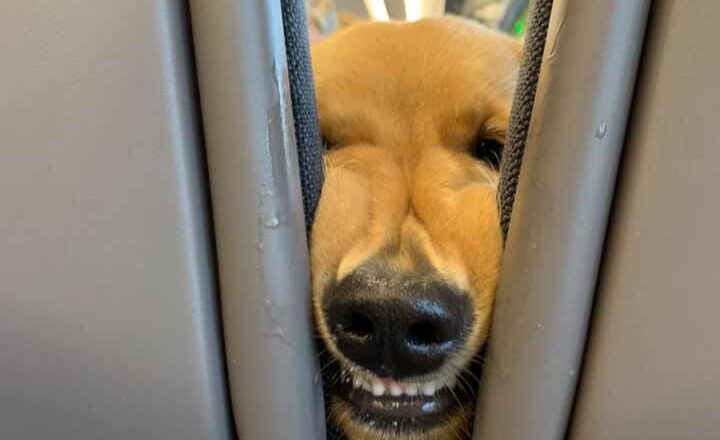 When Huxley’s mom took him on his very first plane ride, the golden retriever puppy soon discovered what we all know: airplanes are boring.

Huxley got mad when his mom didn’t give him the attention and entertainment he demanded, and he decided to teach her a lesson and take matters into his own hands.

The puppy apparently reasoned that if his mom wasn’t ready to shower him with attention, then maybe someone else was!

So Huxley moved away from his mom and sat next to the man in the front row.

“He spent 30 minutes in that seat; the man next to him said he was a very good passenger and the man across the aisle took selfies with him,” Huxley’s mom told The Dodo.

However, while sitting in the seat, Huxley realizes that his mom has opened a diner!

Huxley pressed his face between the seats, trying to reach for the chips.

He stuck out his tongue as far as he could, stuck his nose between the seats, and made the stupidest, most charming face in the world.

He couldn’t reach them, but suddenly he had all the attention he could need; his cheerful expression made everyone around him laugh.

Huxley enjoyed entertaining his fellow travelers and spent the rest of the flight cheering everyone on.

Obviously, flying doesn’t have to be that boring after all!
I hope one day we all get to fly with such a sweet companion.